Sunday’s are comforting aren’t they?  Especially in the Fall.  The sun streamed through the windows most of the day flooding the apartment with light and warmth; the cats lounging in sun beams on the warm hardwood floor.  We walked along the seawall to Granville Island, the best market in the city.  Farm fresh veggies and old fashioned butcher stands. Gourmet cheese and pasta, a cooks dream!. Back at home I cleared the house of all the Autumn decor and stored it away until next year.  November is a transition into Winter month so I put some pussy willows in a vase on the dining room table, placed a small cypress tree wrapped in burlap on the coffee table and put up the fairy lights in the kitchen.  I also pulled out my winter candles in forest-y scents of Fir & Pine.

Ever since we were in Siena (Tuscany) in June I’ve been meaning to make Boscaiola aka: Woodsman Pasta.  My fiance ordered it every time we went out to dinner and he says my version was just as he remembers it.

Based on a dish hunters would cook up in the forest over an open fire with foraged mushrooms and wild boar, in the city I had to settle for rehydrated Morels and pork fennel sausage.  A wonderfully cozy dish.  This is my version of Italian Boscaiola. 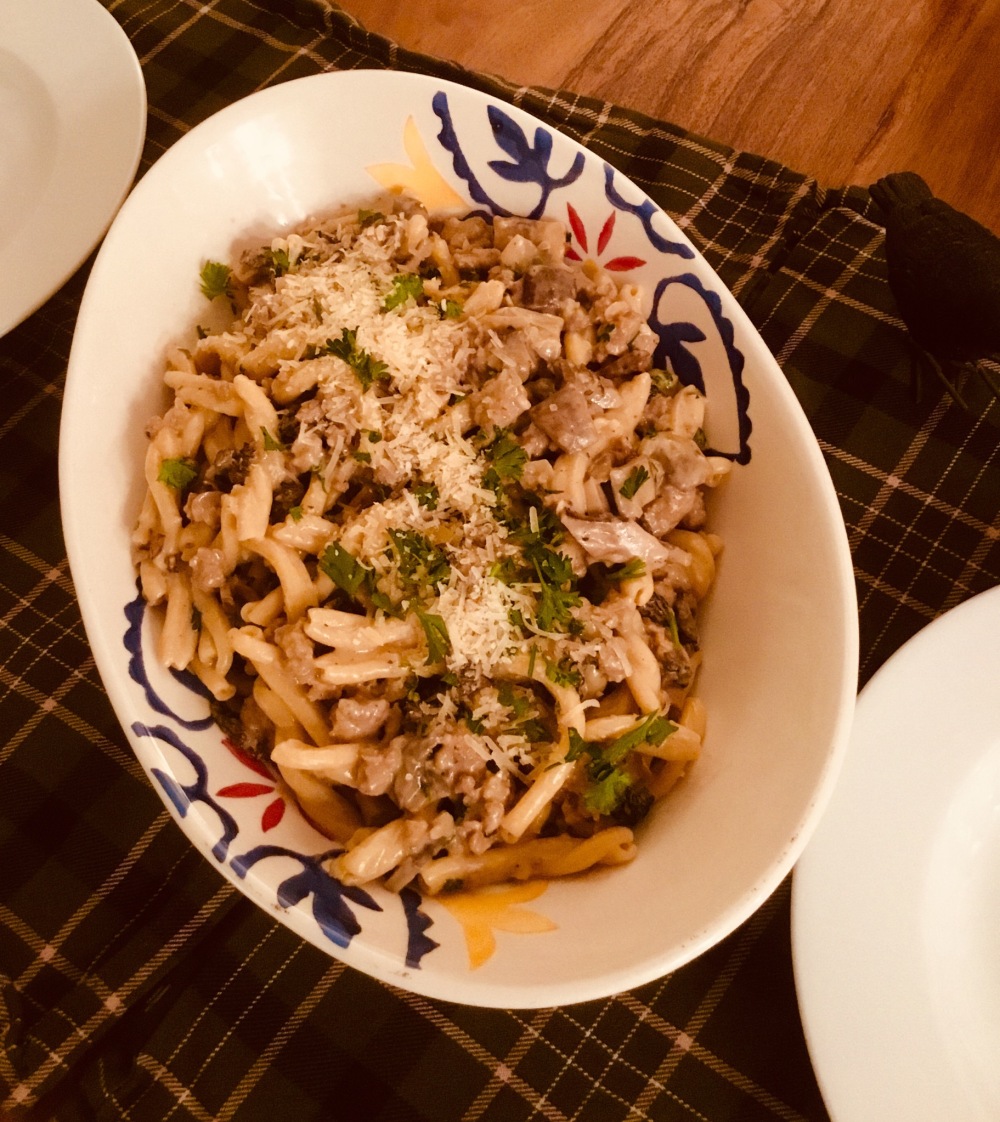 2 packets of dried exotic mushrooms (I used Morel and an Mix) – rehydrate in a bowl with 1 cup & 1/2  boiling water for 20 minutes.  Save the water as we’ll add it to the pasta for flavour later.

4 pork sausages of your liking. I used 2 Montepulciano sausages and 2 pork fennel sausages.  Uncase the sausage as we only need the meat.

1 small carton of half and half cream (about 1 cup)

salt and pepper to taste 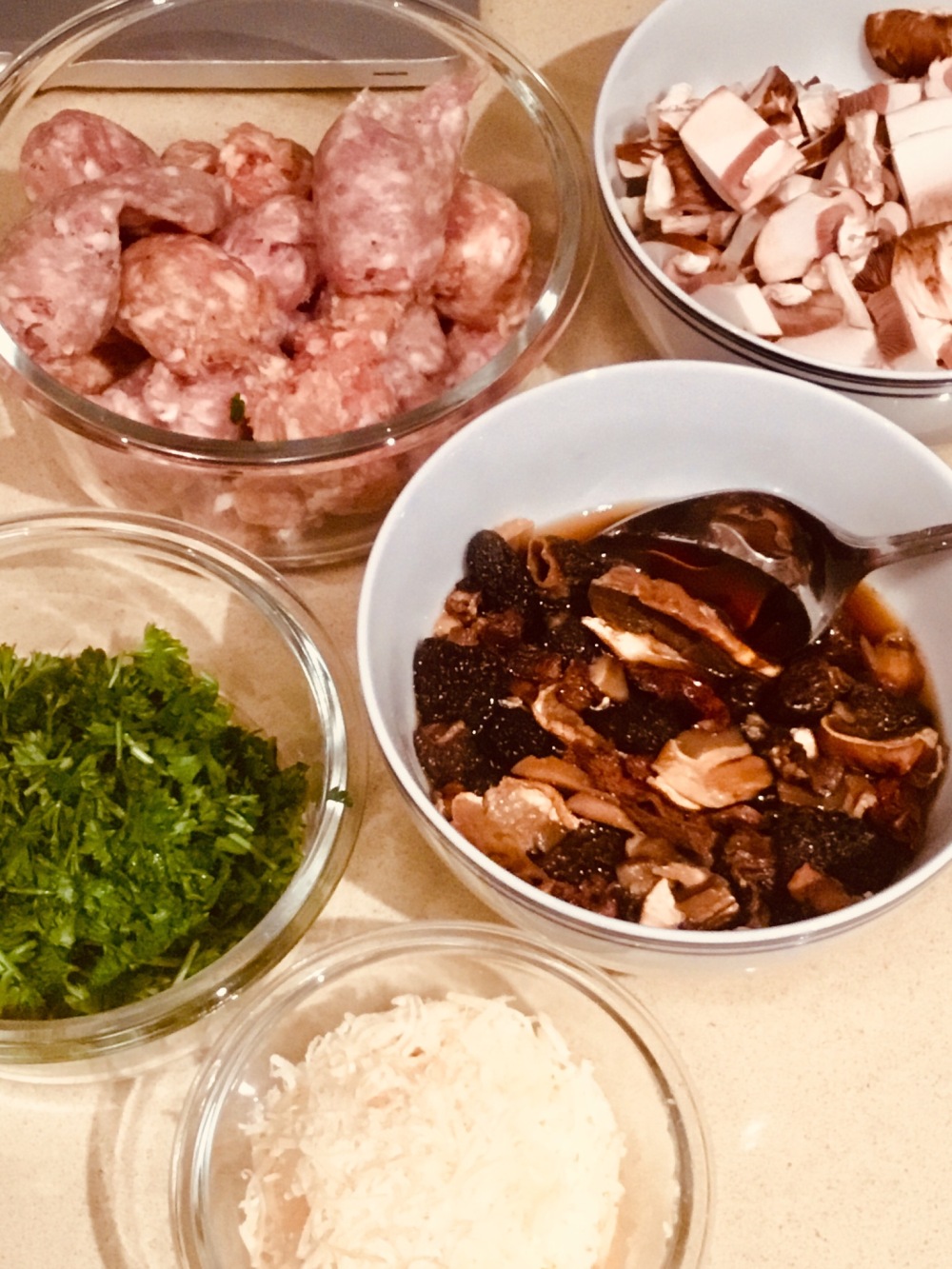 Have all your ingredients ready in bowls as this dish goes quickly. 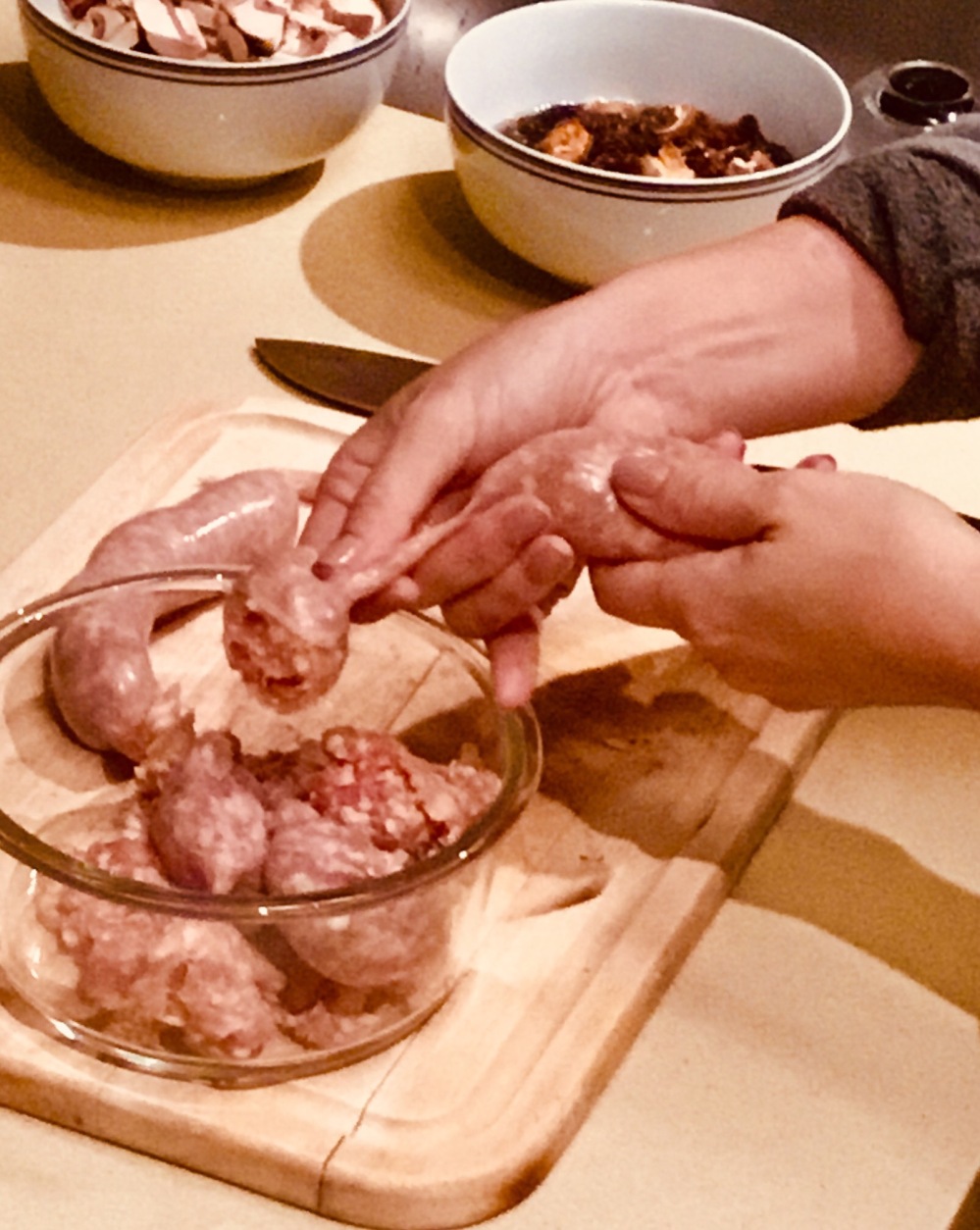 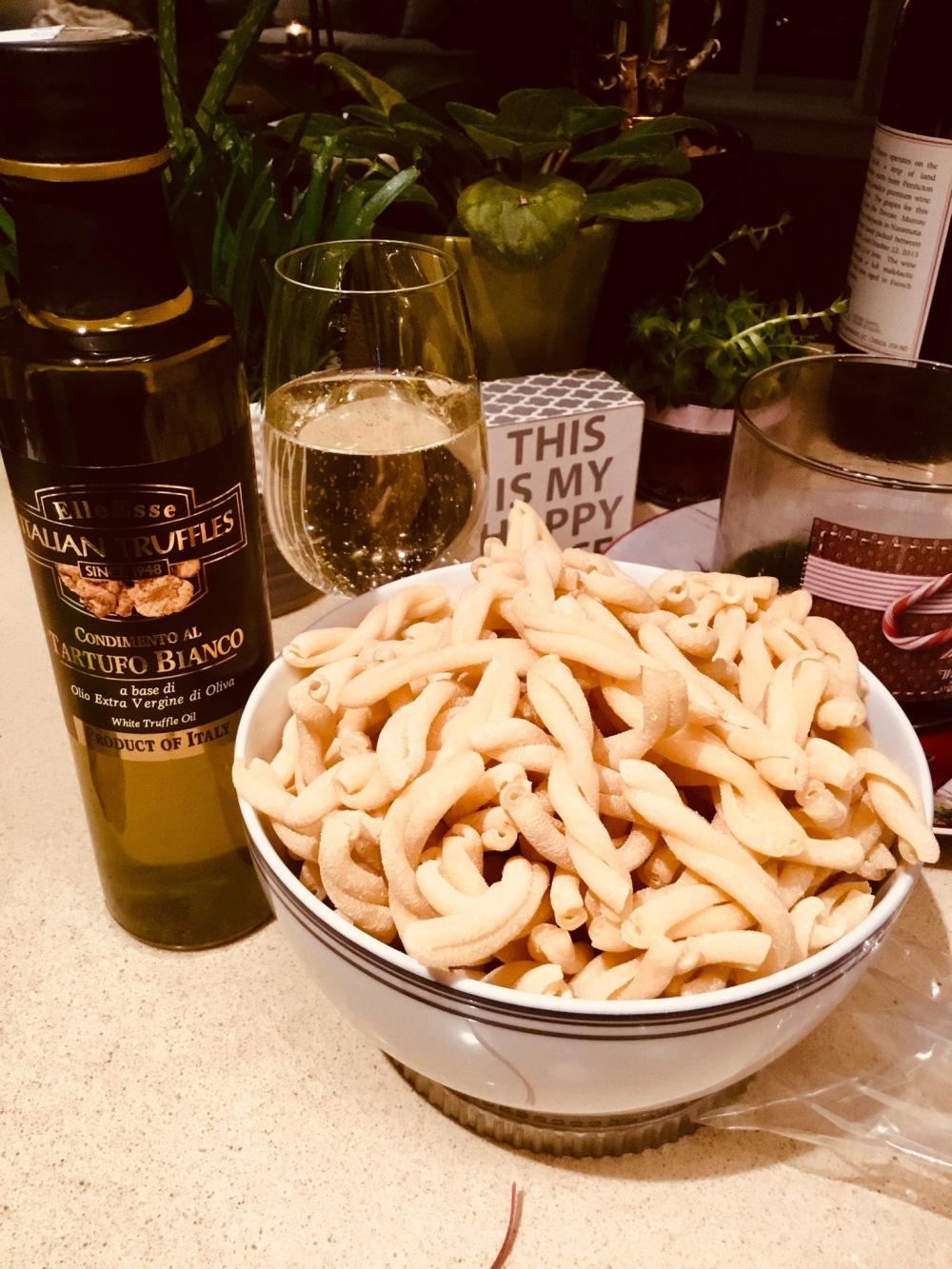 To a deep pan on high heat, add the Olive Oil.

Add the shallots and brown then add the garlic.  Sautee for about 1 minute and add the sausage meat and with your spoon, break up the meat to make it into small chunks.

Cook on high heat to brown. Add all the mushrooms, a pinch of salt and black pepper and cover. Leave on high heat and cook for 5 minutes.  3 minutes in, add about 1/2 a cup of the mushroom broth (which you created by rehydrating the dried mushrooms).  Cover again.

Boil your pasta water and cook pasta until al dente. Drain and set aside.  Don’t add salt or oil to the water.

After 5 minutes, reduce the heat where you are cooking the sauce, uncover and cook for another 5 minutes or until water is reduced.

Add the pasta to the sauce and stir.  Then sprinkle 3/4 of the parsley.

Now add the rest of the mushroom broth and turn the heat up to high again.

Blend the pasta well so that it releases the starch into the water.

Stir in the cream and then 1/2 of the parmesan and mix well.

Pull the pan off the heat.  Turn off the stove and drizzle with truffle oil.  Mix to coat. 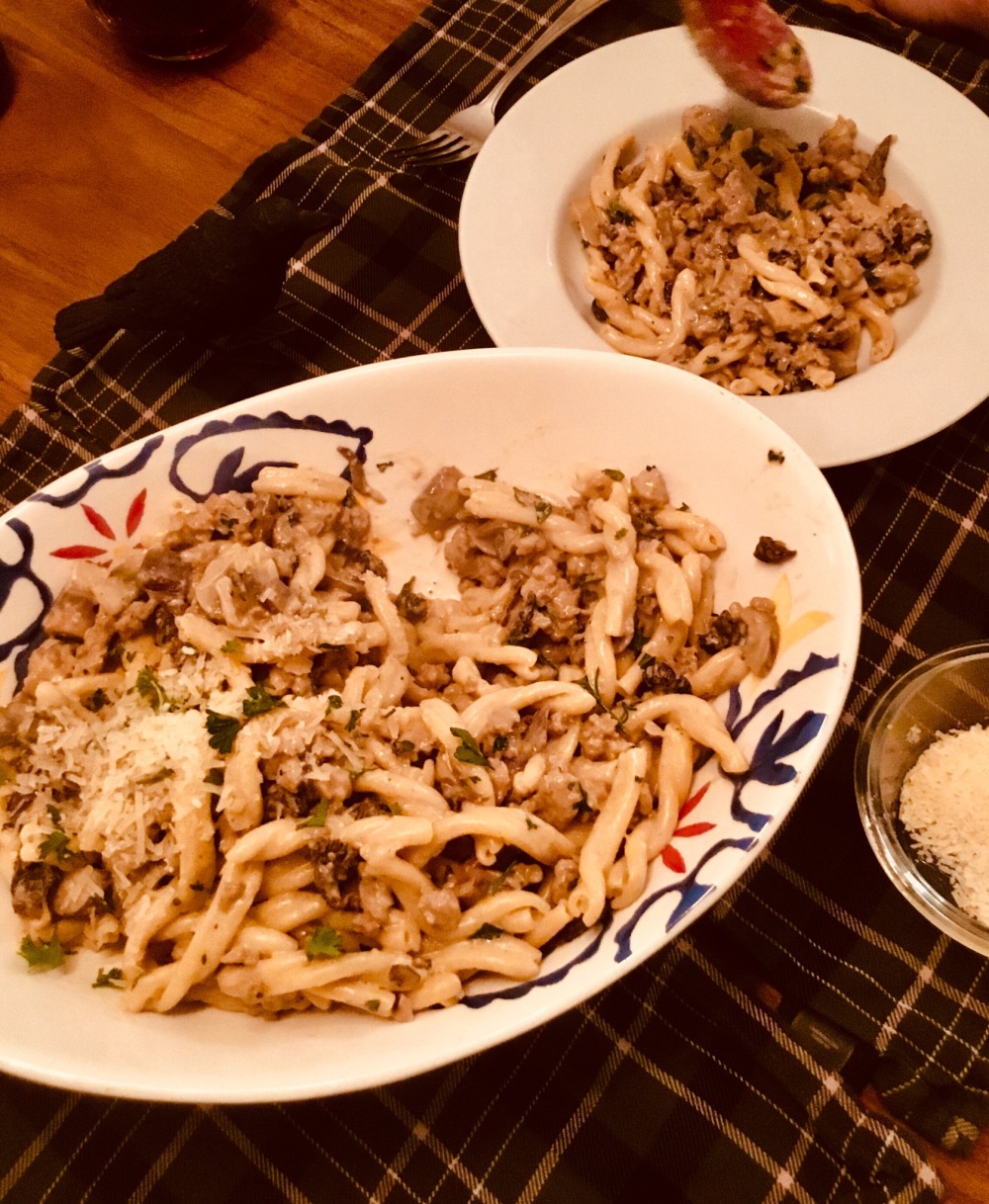 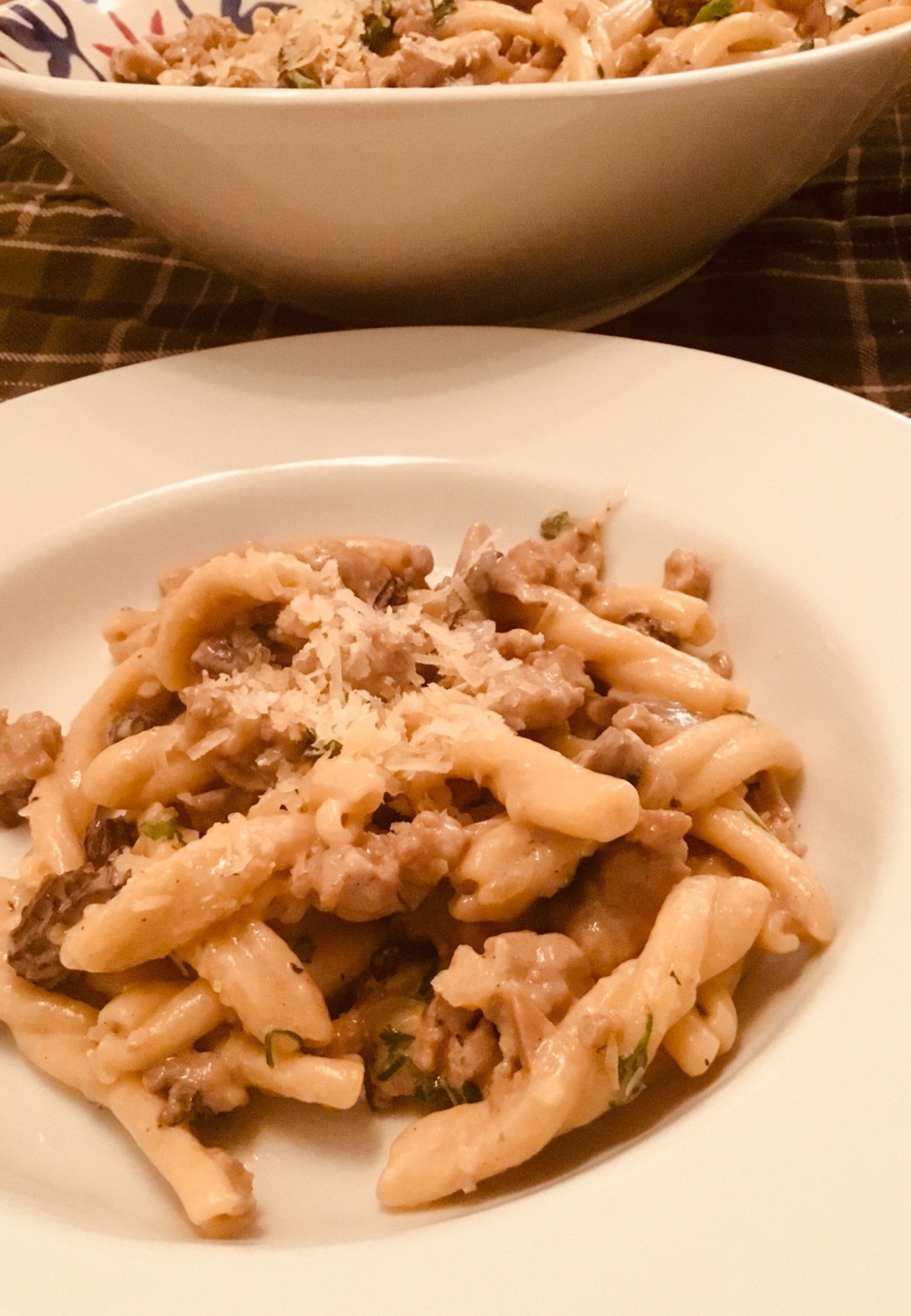 Serve immediately with a good sprinkle of parmesan cheese and parsley.